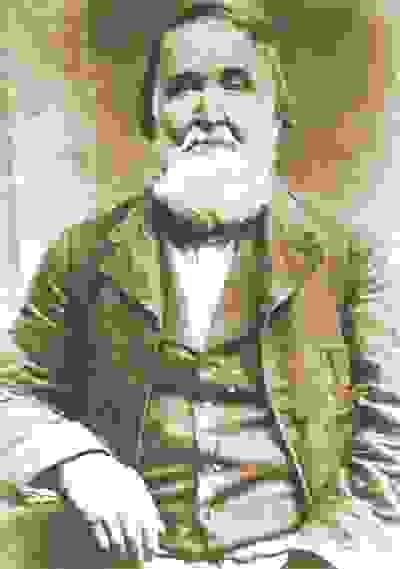 Robert would have been a boy of around 15 when his family moved from Lincoln County, Tennessee up to Morgan County, Illinois, and then on to Knox County, Illinois.  After the death of his father, Robert is the person passing along approval from his mother for one of his sisters to marry.

The family moved to Barry County, Missouri, around 1837. It is in Missouri that we begin to see Robert Carroll McGehee come of age and marry.

I believe "Uncle Robert" here is referring to Robert C. McGehee, based on locations and dates.

Robert, first, married Elizabeth Bray on March 25, 1838.  Robert was listed on the 1840 census living in a cluster of his family in Spring River Township, Barry County Missouri.  His new young family is listed with one daughter under 5 years old.  I believe this first daughter died because his first known daughter is named Martha Elizabeth McGehee and was supposed to be born in 1843.  If she was born in 1843, she would not show on the 1840 census.  The other option would be that she was born earlier than 1843.

I believe that Robert Carroll and Elizabeth Bray McGehee had 6 children together.  One unknown daughter then Martha, Louise, George William McGehee (who later spelled it McGee), Mary Jane and James Allison McGehee.

After about 20 years of marriage, Elizabeth Bray McGehee apparently died around 1858-1859.  Robert married a second time, to Nancy Elkins, on September 9, 1860 in Lawrence County, Missouri.

If you notice, the marriage was performed by Robert’s brother, Rev James McGehee.  Robert and Nancy had 5 children that we know of.  Elizabeth Ann, William, Jane, Eunice Francis, and Sarah.

"Run off the farm"

One story related by Marylin Pennington relates that when Nancy was pregnant with Eunice Francis, the family was “run off the farm.”  This was probably in late 1864 or early 1865, as Eunice was born in May of 1865.  The story indicates that a group of “bushwhackers” came onto the family farm and told them they had twenty-four hours to get off the property.  This area was a rough place just before and after the civil war.   There is no further information about the whole issue, but Robert took his family and left.  He moved over to Greene County, Missouri.  Where he lived at the time is unknown.    Robert had purchased a clock at the probate sale of my gr, gr, grandfather, who was Robert’s brother, John McGehee.  I have often wondered if those bushwhackers got my gr, gr, grandfather’s clock!    On the 1860 census, Robert is listed in the area known as “Green” in Lawrence County, Missouri, which was in the northwest part of the county.  The 1870 census records that Robert lives in a township known as Robberson, northwest of Springfield, Greene County, Missouri, a distance of about 30-40 miles, depending on the route traveled.


I have unsuccessfully searched for Robert’s death record or obituary.  More research needs to be done in his later years.  There might be a will or other documents in Greene County, but I have not had time to look into that.  It is most likely that he died around Fair Grove, Missouri, after 1893.


About the above image...

The picture above is said to be L to R - William McGehee, Jane McGehee Finch, (her husband Will French behind her), Eunice Francis McGehee Pennington, Sarah McGehee Adams. Children of Robert Carroll and Nancy Elkins McGehee.

Their first child is unknown.  It is a bit heartbreaking to write the above title, "unknown daughter." A life, just a small child that perished before the age of 15.  We know nothing about there other than she was listed as a "female under the age of 5" in 1840.   She was likely only 1 or 2 years old at that time.

Martha Elizabeth McGehee was born on February 7, 1843, in Missouri.  In 1860 she married William Wesley Mason.  Together they had nine children and lived their whole life in the area of Greene and Lawrence Counties, Missouri.  Their children were James, Charlie, Leanora, William, Josie, Clementina, Mollie, George, and Stella.  Martha died on March 10, 1882, and is buried in Lawrence County, Mo, at Elm Spring Cemetery.

Louisa McGehee was born in 1845 in Missouri.  She married John Gist in 1862, and the two apparently moved to Arkansas because their first child we are aware of was born there in 1866.  Their children were James William,  Vena, Sarah E, Robert, Mary, and J Milton Gist.

Mary Jane McGehee was born on January 9, 1853, in Lawrence County, Missouri.  She married Caleb Walker Andrews in Greene County, Missouri, on October 23, 1873.  I am only aware of three children for this marriage.  William Robert Andrews, Sterling Andrews, and Della Mae Andrews Riggs. Mary's obituary stated that Sterling "preceded her in death."  In Rice cemetery, there is a "Sterling Andrews" that is listed as an infant child being born in 1883.

Upon her death, Mary lived at 6211 W Madison, Springfield Mo.  She was buried along with her husband in Dade County, Missouri, in the Walnut Grove Cemetery.   She passed away in 1924, and Caleb passed away in 1922.


James Allison McGehee was born in June of 1857 in Missouri.   James married Ophelia Austin in 1876.  Ophelia Austin had been born in Stoke-on-Trent Unitary Authority, Staffordshire, England, in 1858.    Ophelia is an exciting story and seems to have had quite the travels in her lifetime.  She is shown arriving in the United States on a ship called "Monarch of the Seas" in 1858, no doubt just a small baby.

Her origin, according to those records, is "Irish." According to the 1870 census of Walton, Labette Co, Kansas, her parents were Joseph and Elizabeth Austin, both from "England." Her mother "Eliza" was listed on the passenger lists as well as siblings, but her father was not, and he may have come to the United States earlier. The 1860 census shows them in Evansville, Vanderburgh, Indiana. The 1870 poll shows them in Kansas, and then the 1880 census indicates they are living Lafayette, Crawford County, Arkansas.  This lends reason to the idea that James and Ophelia may have married in Arkansas.
James and Ophelia lived in Crawford Co, Arkansas, in 1880.  I do not know if James went to Crawford county and married Ophelia there, or if they married in Missouri and moved to Arkansas.  I have never located a marriage certificate for them.
James and Ophelia lived in Arkansas at least until 1884, when their youngest child was born there, but by 1900 they lived in Hill County, Texas.  They would leave Hill county, Texas, and move to Chickasaw Ward 2, Grady County, Oklahoma, by 1910.    The children of James and Ophelia are George Allison McGehee, Mattie Pearl, William, Florence, Joseph Carroll, Charles, and Bernice.  James died in 1934 and Ophelia in 1932, both in Grady County, Oklahoma.  They are both buried in Rose Hill Cemetery.


After Robert Carroll McGehee married Nancy Elkins, they had the following children.

Elizabeth Ann McGehee was born in Missouri on August 19, 1861.  I do not know anything further about Elizabeth.  I have never found any information about marriage, children, or death.

Eunice Francis McGehee was born on May 12, 1866, in Missouri.  She would have been the first of the children to be taken after moving to Greene County, Missouri.  On March 28, 1895, Eunice Frances married Andrew Bray Pennington.    The following might become complicated to explain, but I will try to make it simple.  If you remember in the children listed for James and Jane above, that Nancy married Simeon Pennington and Elizabeth married Corbin Pennington.  These two Pennington men were sons of Asa Pennington.  Andrew Bray Pennington was the son of Peter Pennington, who was a brother to Corbin and Simeon.   Peter Pennington's wife (Andrew Bray Pennington's mother) was Sarah Bray.  Yes, you had heard that name before because Robert Carroll McGehee's first wife was Elizabeth Bray.  At this time, I do not know if there was a connection between the two Brays, but it is likely.  Andrew was born late in his parent's lives, and they were both dead by 1860.  He first married Susan Catherine Jones, and the two had Jane, William H, James W, Frank, Maude, Cora, Mary Ophelia, Martha J, and Roy B.   Susan Catherine Jones Pennington died in 1894, and Andrew married a second time to Robert Carroll McGehee's daughter, Eunice Francis McGehee.  Francis was 13 years younger than Andrew and bore him four more children before he passed away in 1923.  These children were Flossie J, Sarah Francis, Myrtle Lillie, and Robert Carroll Pennington.   In 1930, Frances Eunice McGehee Pennington was living with her daughter, Myrtle Pennington Lane, back in Mt Vernon, Lawrence County, Missouri.  She is 64 years old and a widow. She is buried in the Miller Cemetery, at Miller, Lawrence County, Missouri, her life having come full circle.  She was driven from that area while still in the womb, and it only seems appropriate that she would return, and her body interred there. She died on March 12, 1948.

Sarah McGehee was born in Missouri, September 2, 1869.  She married Edward Adams on August 1, 1897, when she was 28 years old. To my knowledge, Sarah and Edward only had two children, both daughters.  Georgia Florence Adams and Eva Blanche Adams.  They were in Greene County, Missouri, until the 1910 census when they are seen in Stanton, Linn County, Kansas.  In 1920 the census indicated they were living in Osawatomie, Miami, Kansas.   Edward passed away in 1921 and is buried there in Miami County, Kansas, in the Osawatomie Cemetery.  Sarah lived on almost another 40 years after Edward passed leaving this world on October 9, 1959, at the advanced age of 91.  She is buried in the Floral Hills Cemetery, Jackson County, Missouri.

Photo at Right is Caleb, Mary (seated), Della, and Robert.   Larry Wantland shared this photo on ancestry.com in 2010.

The photo on the right is Caleb and Mary (Seated), with William Robert Andrews standing behind them.  This photo was shared on ancestry.com by Tom Andrews in 2010. "Robert, age 52, died at home from Chronic Nephritis. A warehouse man in Springfield, Robert's wife Martha, is the informant on his MO Death Certificate."

This excerpt comes from the Springfield News-Leader, dated Dec 30, 1896.  Based on the location, dates, and cemetery location, this is likely Nancy Elkins McGehee.

Return to "The Children of James and Jane Patterson McGehee"

You may click on the link below to return to the list of James and Jane's children, or go to the top of this page and navigate under the drop-down menu.

The Children of James and Jane McGehee