While in Illinois, James and Jane's family changed dramatically.  While some of the family would forge on, pioneering new areas, James, the father would not participate, having passed away in 1836.   James and Jane's daughter, Lucy, would marry Ben Campbell, and the couple would move North to Bureau County, Illinois.  For a time, Jacob, Lucy's brother, would be there with them as well as "William McGehee," believed to possibly the son of Pleasant McGehee.   Sadly, the daughter, Jane, would marry Hayden Hilton, give birth to a baby girl, but Jane Hilton passed away shortly after.   The baby, Sarah Hilton, was raised by Jane, the widow of James, and the father, Hayden Hilton, went on to marry someone else and have a family.  The family, minus, Lucy, Jacob, Jane, and their father James, move south from Illinois toward Missouri.


The story tells that when Sarah Emily Pennington was one year old, her family went from Alabama to Illinois, about 1829, as Sarah was born in May of 1828.  Then when Sarah Emily was about eight years old, the family left Illinois and went to Missouri.  This would have been around 1836-1837.


The story further relates that the family traveled with Native American's who were moving to the "Cherokee Nation," and the Pennington's traveled with them part of the time. During part of this trip, it is said that Sarah Emily rode on a horse with a Native American woman.     Upon arriving in what was at that time, Barry County, Missouri, the story states that Simeon Pennington built the first farmhouse.  (The story states that Simeon and Pleasant Pennington built the first farmhouse - so it seems that based on other data, Pleasant is mistaken for his sister Nancy).  This part of Barry County later became Lawrence County, Missouri.


Some of the children of Robert Carroll McGehee who lived in the Lawrence Co. Missouri area. 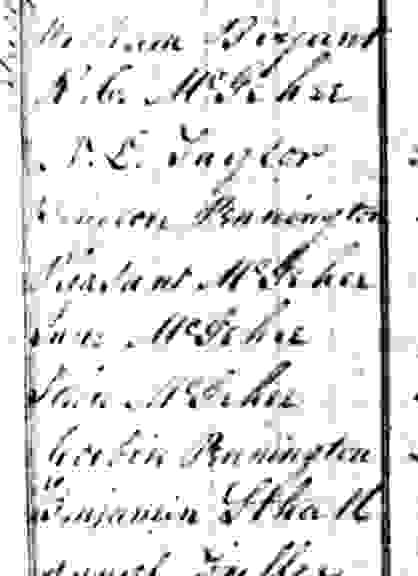 The family arrived, once again, as pioneers in a mostly uncharted area.  They were on the very edge of what could be called a frontier.


As Lincoln County, Tennessee had been for James and Jane in the early 1800s, Lawrence County, Missouri, would be a place to grow deep family roots, some of which likely survive today, some one hundred and eighty years later.


Of all the children, Pleasant, Nancy, Robert Carroll, Sarah, and James Jr would be the ones to stay and live out the remainder of their lives in Lawrence county.  You can find their names on many of the documents in the Lawrence County Courthouse and on the tombstones dotting the landscape.   Their blood, sweat, and tears are inextricably embedded into the land.

In the above picture, almost all of the family names are listed.  This is the 1840 census of Barry County, Missouri in the area known as "Spring River, Township".  The names listed are "Stahl, McGehee, Pennington and Bryant.

The McGehee's listed are Robert Carroll McGehee (RC), John McGehee, and Pleasant McGehee  - all sons of James and Jane.

Benjamin Stahl would marry Sarah McGehee, daughter of James and Jane the year of this census, 1840.

THe Death of Jane Patterson Mcgehee

I have always been amazed by what I learn concerning my gr gr gr grandmother, Jane Patterson McGehee.


Family tradition states that she was a "little Cherokee Indian woman who had a beautiful singing voice."  We have no proof of this, and after 4 DNA studies, I have no recognition of any Native American DNA at all.


That doesn't mean it isn't there, however, but that's another subject.  Jane lived her life through some of the most challenging times in American history. She lived through her husband fighting in two wars, and after losing her husband, she lived as a widow for another 23 years. She endured the loss of a daughter and raised her granddaughter Sarah Jane Hilton who would go on to be a missionary in Oklahoma.  Jane brought ten children into the world for over twenty-two years.


The probate documents held in the county courthouse for Jane McGehee, filed after 1900, state that Jane passed away in the winter of 1859.   We do not know where she is buried, but considering the number of descendants who bear her name, it is likely that she was lovingly and tenderly laid to rest among family.


As in the case of her husband James, I hope to meet her someday.

The image above is the probate document for Jane McGehee, signed by her grandson Thomas D McGehee, son of Rev. James McGehee, Jr.

Go on to the children of James and Jane McGehee